Augusts edition of Birthday Lottery is in! 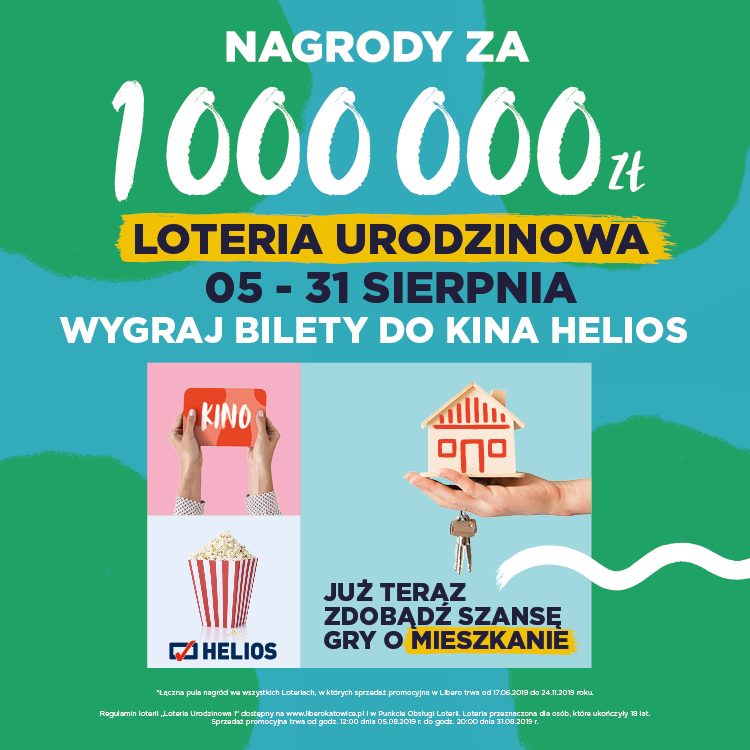 The next phase of the 6-month Libero promotional campaign has just started, in which customers can win thousands of gifts with a total value exceeding PLN 1 million. In the pool of the first phase of the Birthday Lottery, that lasts until the end of the holiday, over 6,500 tickets to the Helios cinema will be distributed. The participation in this campaign is also a chance for the main prize – an apartment in Katowice.

Thousands of prizes and an apartment in the grand finale.

The winning season has been in Libero since June. Recently, during the grand final of the Summer Lottery, a new owner of the Skoda Scala car was selected. In August, clients of the complex are fighting for over 6,500 instant prizes – tickets to the Helios cinema, and in September the second phase of the Birthday Lottery will start, with participants competing for electronic equipment, holidays and trips abroad as well as shopping vouchers in Libero. There is also a chance for participants of both lotteries to win an apartment in Katowice.

That’s how you win!

To take part in the August edition of the Birthday Lottery, you should shop for at least PLN 50 (on one purchase proof) between August 5 and 31 and go to the Lottery Service Point with this receipt. For each PLN 50 spent, a participant can receive one bar code, the maximum number of coupons issued based on one proof of purchase is 10. The codes should be scanned in one of the marked info points in Libero and checked if you have won one of the instant prizes. If your ticket is lucky, a machine will print a confirmation of your prize on the basis of which lottery staff will hand you a prize.

Chance to win an apartment

Each participant in the first phase of the Birthday Lottery also has a chance to get keys to an apartment in Katowice. To participate in this game, after taking part in instant prizes, participants of the August Lottery should collect a special voucher from the Lottery Service Point giving them chance to win an apartment. Then, in September, October or November, they should visit the service centre again and exchange their voucher for a Lottery ticket and go for the grand prize.

The regulations of the first phase of the Birthday Lottery are available here.