Films For Food Festival for every food fan! 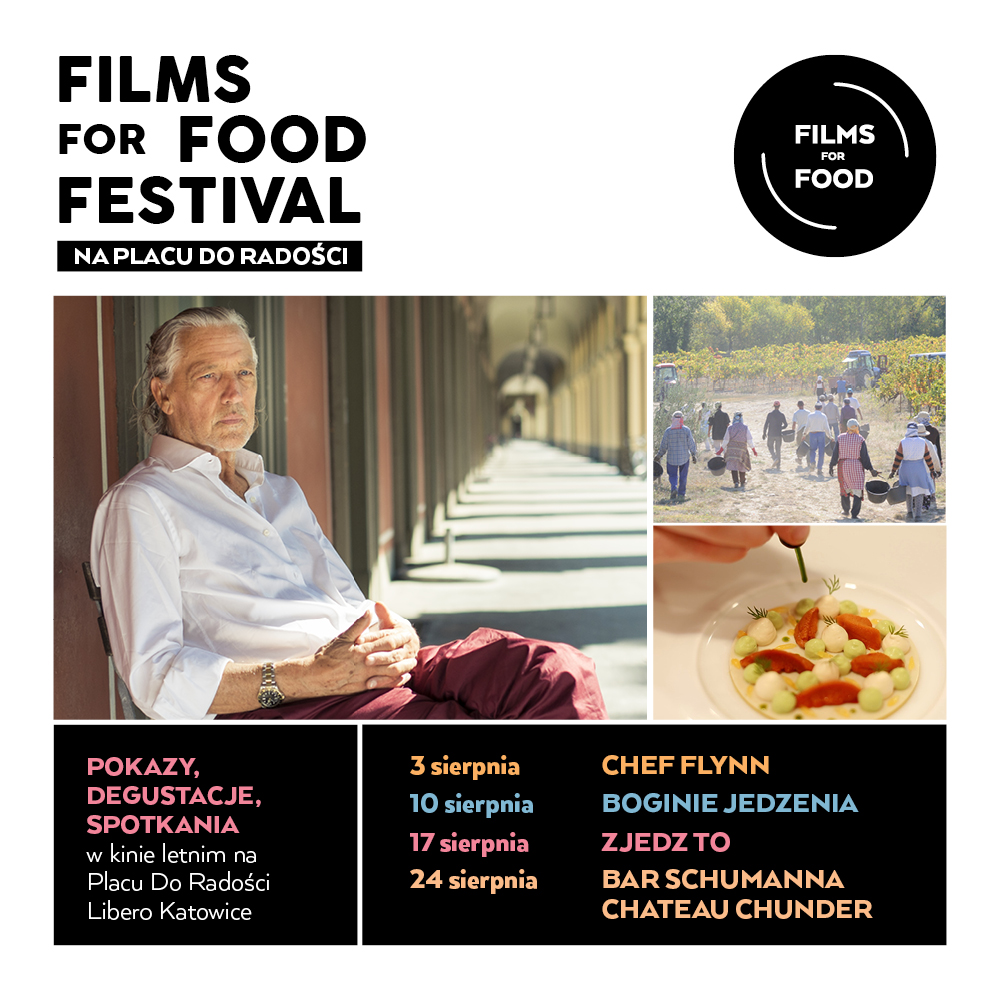 The Films For Food Festival will last until the end of August. Open-air shows of the best food-related productions take place every Saturday at the Square to Joy, in front of the main entrance. They go with tastings and meetings with culinary art masters. Each screening starts at 7:00 pm.

After the success of the July screenings of the Films For Food Festival, Libero continues Saturday meetings with culinary films and delicious food. Again, every Saturday in August, the best film productions dedicated to the culinary art will be shown at the Square to Joy. Each session will be preceded by delightful aperitivo, i.e. snacks and drinks inspired by the presented materials.

– We import documentary and feature films to Poland, in which food plays an important role – about chefs, restaurateurs, food productions and culinary culture of various countries. I am very happy that we can appear during the summer outdoor shows as part of Summer at the Square to Joy – says Jakub Gutek, co-founder of the Films For Food Festival, a partner of the summer edition of the festival in Libero Katowice.

On August 3rd, viewers gathered in the Square to Joy will be pleased to see the Chef Flynn documentary. This is a story of Flynn McGarry, a wonderful child of the culinary world, who as a twelve-year-old opened a dinner club at his own house with a menu enviable by many chefs. At the age of 16, he was on a cover of The New York Times, and when he was 19 he opened his own restaurant in New York. Gourmets from around the world are delighted with its specialty, Beet Wellington, i.e. beetroot wrapped in toppings and French pastry, which is a variation on the famous Wellington with beef. The documentary would be a classic tale of fulfilled dreams, if it was not for Flynn’s mother, Meg, who provided the creators with family archival video materials and accompanied the child on the screen, like his shadow. Thanks to it, the production of Cameron Yates acquires the character of a suspenseful psychological thriller.

On the second Saturday of August, the audience of the Films For Food Festival at the Square to Joy will be happy to see the documentary “Goddesses of Food”. This is a picture of creative and influential women working in the culinary business: chefs, patisseries, sommeliers and bartenders, from fine-dining and restaurants with three Michelin stars to street food. Although they come from different parts of the world, they all agree that the world of culinary is not only reserved for men, and women have a very important role to play in it. They treat gastronomy as a platform for communication with others, the possibility of education, learning about traditions and culture of other countries, but also a form of supporting local business.

How is it possible that we all love to eat, follow blogs, magazines and cooking programs, and throw away as much as 50% of food we produce, just because it looks bad and unattractive? The author of the movie “Eat it” follows the process of wasting food on food-producing farms and in our homes. Only in the US products worth millions of dollars are thrown away every year. The documentary makers did not buy food for six months and ate only products that would normally end up in the trash. What was the result of this experiment? The viewers will get to know on August 17th.

Schumann’s bar and Chateau Chunder at the end of the festival (24.08)

The Films For Food Festival at the Square to Joy will last until August 24th. On this day, after aperitivo, there will be as many as 2 screenings. First, viewers will watch “Schumann’s Bar”, an immersive film journey through the best bars of the world. The narrator and guide for meetings with masters of the bartending art is Charles Schumann – a legend among bartenders, an owner of the iconic Schumann’s Bar in Munich and an author of best-selling books on alcoholic cocktails. Together with him, viewers will visit Dead Rabbit (New York), Hemingway Bar (Paris), El Floridita (Havana) and High Five bar (Tokyo), and get to know his personal history of professional development.

The second film that will be screened at the Libero outdoor cinema will be “Chateau Chunder: A wine revolution”. It is a documentary whose creators, using colourful anecdotes, show the transformation that Australian wine has gone from joking in Monty Python’s sketches to achieving global success.

More about Films For Foods Festival You will see here.
For detailed schedule of Summer on Square to Joy you will here.